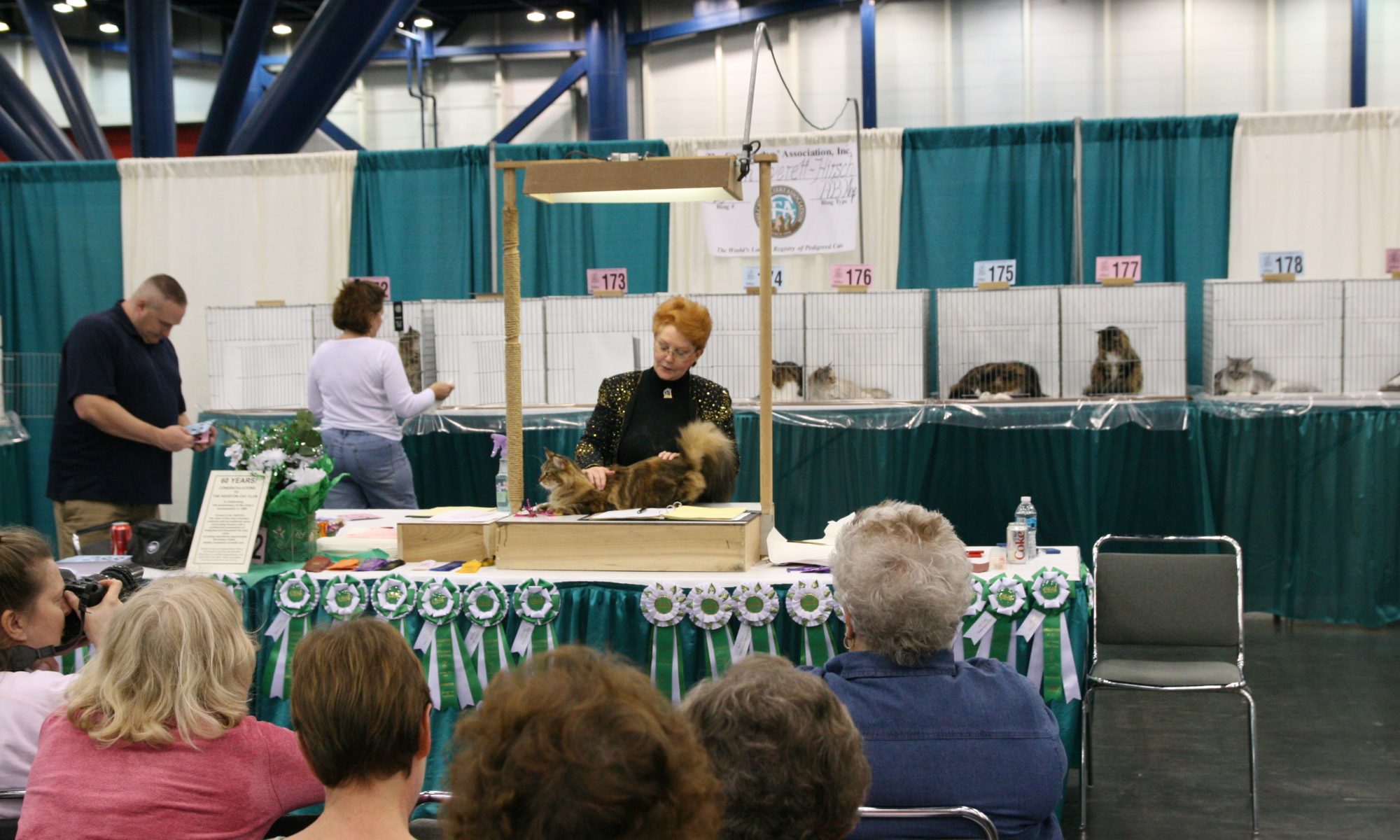 History of the Houston Cat Club

In the 1920’s and 1930’s the original Houston Cat Club came into being;  Mrs. C. Carroll and her mother Mrs. B. Walton were members of this early group.

Houston Cat Club restarted in 1949, and was incorporated in 1959.  The original incorporators were Jeanie McPhee, Virginia Coughlin, and Lessie Garrison (first President).  Some of the early members Mrs. C Carroll, Mrs. B. Walton, Mr. and Mrs. Author Platt, Mr. and Mrs. R. Green, and Mrs. C Streetman.  Houston’s first show was in 1951 at the famous Shamrock Hotel. The first HCC show judges in 1951 were Mrs. A. Revington and Mrs. M. Rotter.  Houston had only 2 or 3 ring shows until 1965. Shows were held at the Shamrock Hotel until 1969 when the show was moved to the Albert Thomas Convention Center and then on to the George R. Brown Convention Center in 1985.   Members of the HCC ran the 1963 Annual at which the GSR came into being with Mrs. L. Garrison as the first regional director.

Houston shows were the largest in the country for many years.   Shows in the 1950’s typically had about 250 pedigreed cats entered.  Beginning in 1965, entries increased rapidly until 1977 where a record 608 pedigreed cats were entered in competition.  David Mare judged Best of the Best at the only Congress of Specialties show in 1977.  The 1980’s often had more than 500 pedigreed cats competing and in the 1990’s 350-450 entries were typical.

There was a brief hiatus in 2001 and 2002 while the club regrouped.  Shows resumed at Greenspoint Mall in 2003 and 2004, then, beginning in 2005, we returned to the George R. Brown Convention Center.  2007 marked our 55th show.  The distinctive Houston Cat Club logo first appeared in the 1975 show catalog for the 25th Anniversary show.

For many years every cat that made a final also received a prize.  Sometimes they were very elaborate, like silver ice bucket, bowl, or tray, sometimes cash, as much as $50 for Best Cat, and sometimes very simple, a few dollars or a Houston Cat Club logo mug.  In 1964, the Best Cat received a $25 War Bond.

The Household Pet class was included from the beginning.  HHP classes were very large in 1973 show where the entry was 313 and the judges were Jeanie McPhee, Don Williams, David Bandy, and Adam Frecowski (Best of the Best).     One of the highlights of the HHP Trick Contest for many years was Kim and Barney, a white Persian who rode on a tray that Kim carried as though she were serving drinks in a restaurant… often she was on roller skates, too.

HCC shows have had huge numbers of spectators.  At times, the ticket line has been down to the end of the block and the Fire Marshall guarded the door, letting people enter as an equivalent number exited.  The show in 1973 and another in the mid 1980’s had snowfall and ice to deal with in downtown Houston.  Needless to say there was practically no gate at those shows.

As a Friskies lead show, the entertainment and spectacle of a Houston Charity Cat Show was truly something to behold.  We also had education rings where many vets volunteered their time over the years to give short lectures on health, nutrition, neutering, spaying, cleanliness, presentation, and condition.  We also had various breeds showcased, including the ever-popular Maine Coon.  Karen Crooke assembled a variety of colors and gave a wonderful presentation on the breed.

The Albert Thomas Convention Center had an escalator that came up in the middle of the second floor.  It instilled a whole new level of fear when “cat out” was called.  There was no way to block the escalator to keep cats from escaping, if they got that far.  One year at the Albert Thomas a radio station actually broadcast from the plaza outside.  The DJs visited the show.

The year we had to reschedule and were opposite the Rodeo in February as publicity person, Karen Crooke, wrote Marvin Zindler and pleaded our plight…  We were very afraid the cat show would get lost in all the hoopla and publicity about the Houston Livestock Show and Rodeo.

So, Marvin (Marvin Zindler, Eeeeyyyyeee Witness News…..famous for SLIME IN THE ICE MACHINE reports when he made his restaurant health inspections) and his whole crew came to Scotty Griffey’s home in Memorial and filmed a segment with Scotty and her Burmese and Karen Crooke and Lisa Jones Zalesky and their Maine Coon Cats.  It was broadcast the next evening on Channel 13 and had a great impact on the spectator attendance.  Marvin himself had several Shaded Silver Persians over the years and was a confirmed cat lover. He was quite a persona in Houston television and was happy to help out the Houston Cat Club!

At the January, 1992, show Ann Caell recalls helping with set up – at the show her big responsibility was to pass out exhibitor buttons and assist at the information desk. She also remembers every club member was wearing hunter green and navy blue plaid outfits…except her!!  Didn’t get that memo!  These days Houston Cat Club members can be found wearing their team polo shirts in Houston colors with the logo embroidered on the front.  Many tales abound of club members mentoring new exhibitors in addition to volunteering hours of their time to help put on one of the largest shows in the country.  The club depends on its wonderful volunteers to keep the show going.

The Houston Cat Club has made many generous donations over the years from proceeds from the shows.  The total exceeds $850,000.  Houston Cat Club has donated to the Winn Foundation since 1976 and achieved a cumulative donation of $100,000 in 2007 making it the first club to achieve Boulder recognition under the Winn Donor Tree.  The Houston Cat Club sponsored the First Free Spay/Neuter clinic in the U.S. in 1993.  Scotty Griffey served on the Houston/Harris County Overpopulation Task Force in 1993.